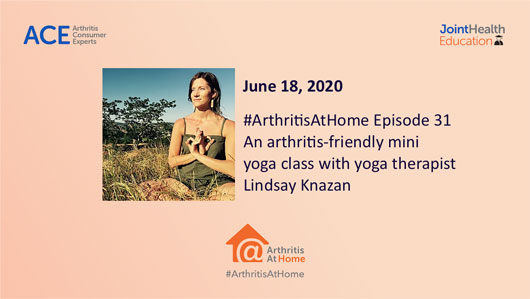 The 31st episode of Arthritis At Home features Lindsay Knazan, yoga therapist at FierceHeart Yoga Therapeutics in Victoria, British Columbia. She leads an arthritis-friendly mini yoga class. She demonstrates different tools and poses that people with arthritis can use and practice from their homes. All you need to follow along is a tennis ball, a wall, and a chair!

Lindsay Knazan is a Yoga Therapist and Co-Owner of Fierce Studios: Home of Fierce Martial Arts & FierceHeart Yoga Therapeutics in Victoria, British Columbia. She is an embodiment specialist who has been helping shift minds and bodies through yoga and mindfulness for two decades. As someone who lives with ankylosing spondylitis, Lindsay has an uncanny ability to relate to people challenged by chronic pain and to support them in moving with ease and towards wellness despite the realities of their disease.

Lindsay specializes in therapeutic yoga, a particular style of yoga that is best suited for people with arthritis: one that meets people where they are in terms of their physical capabilities, works with the science of embodied cognition* and somatic awareness** while engaging the mind deeply in movement practices. Lindsay is passionate about making yoga and mindfulness more accessible for people with arthritis and autoimmune disorders.

*The science of embodied cognition is the argument that our body’s movement influences our mind.
**According to an article published in the National Institute of Mental Health, somatic awareness is when a person acknowledges their own self within their environment and uses sensations to identify the psychological, physiological and social factors to promote healing and self-regulation.