In this issue of JointHealth™ monthly, we are pleased to present a collection of facts and statistics that provide answers to many of the questions we often hear from people with arthritis, medical professionals and government. We also provide a report on ACE's recent trip to meet with elected officials in Ottawa.

Arthritis is everywhere. In every city and town across the country, people live with arthritis. Some forms of the disease are serious, disabling and life-threatening; others are the result of a joint injury, overuse or advanced age.

Yet, in spite of the fact that arthritis is incredibly common, ACE hears time and time again that people with the disease feel as though they are living alone with a disease they do not know enough about. In feedback from ACE community members and JointHealth™ subscribers, people with arthritis overwhelmingly report a desire to know more about the disease: what it is, who has it, how arthritis treatment stacks up next to treatment for other diseases, and how much arthritis costs our society, our economy, our families, and ourselves. 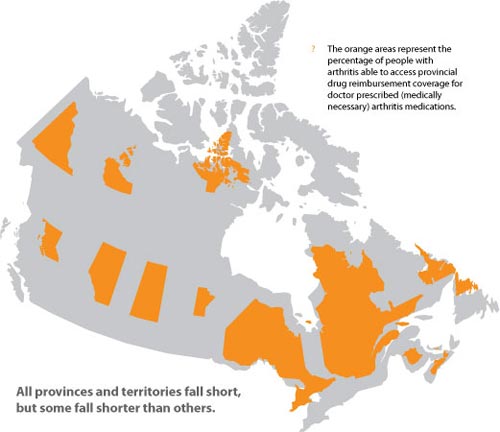 There is an arthritis crisis in Canada. More than 4.5 million Canadians live with the disease—babies, teenagers, people in the prime of working life, senior citizens—yet, the emergency has not yet been fully acknowledged. For these reasons and many others, ACE went to Ottawa in January as part of the Alliance for the Canadian Arthritis Program (ACAP) to meet with elected officials and raise awareness about the disease.

The response has been very encouraging. Representatives from ACE met with MPs and policy advisors and heard some very positive responses. As part of the ACAP, we are moving towards the goal of creating a country where people with arthritis are no longer treated like second-class citizens by the health care system, and we are thrilled to have found so much support from decision-makers in Ottawa.

To keep the momentum going, we encourage people with arthritis across the country to write to their MPs and provincial elected officials and tell them that you look forward to seeing support for a comprehensive Canadian arthritis program, one that offers excellent standardized education, treatment and care from coast-to-coast. Thank you for speaking out for Canadians with arthritis.

ACE thanks these private and public organizations and individuals.
Subscribe to receive
JointHealth™ express
breaking news on arthritis
and
JointHealth™ insight
online/print newsletter